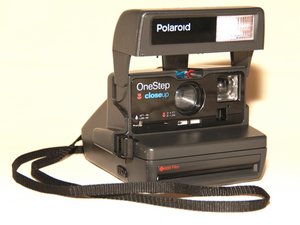 This device is part of the second wave of Polaroid's 600 series cameras that were developed between the 1980's and 1990's. It would instantly develop the film in about three minutes and the battery was integrated into the film pack.

The camera is not working

1. At the beginning, just right after 1 photo(functioning as usual), the camera stoped working, became not responding at all(no film came out and no flashlight, but the light on the camera appear green). I thought it is because ran out the film then I changed the film case

2. When I insert the new film case, that back covering paper did not come out as usual, it come out half way. The camera remains not responding.

3. Then I put it back to the backpack, leave it there as I have no idea what to do. But soon later, I found out that the camera was heated up to about 40 Celsius degree. I took the film case out and insert it back in, the camera start to output the film, non-stop, for a few minutes, even I am not pressing the button and I have opened the film case lid(the chin). A few minutes later, it stops, then I tried to press the button, no response still.

4. A day later, I tried to press the button again, and the flashlight flashed but the film did not came out. The light still appear green.

The camera is still not working now. How someone can help me.