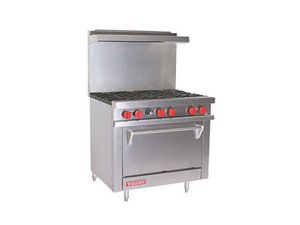 An industrial gas-powered stove by Vulcan.

Hi. I own a Vulcan 6 burner. The cooktop is fine, but the oven pilot will not stay lit. I follow the instructions as described on the panel. When I do get the pilot flame to stay on and turn the oven on immediately when it reaches temp it shuts off.

i was thinking Thermocoupling. Any suggestions? Holidays are upon us and I really need my oven

The first step in diagnosing a pilot light problem with your oven is to make sure the oven even has a pilot. Most ovens have a glow bar ignition system, which functions like a pilot, but is prone to different problems. If the ignition system of your oven does include a pilot, it probably also includes a spark igniter to light it so that it doesn't have to stay on and waste gas. Some oven manufacturers bypass the need for a pilot altogether by devising systems whereby an electronic spark directly ignites the gas.

Open the oven and expose the pilot and burner assembly by removing the cover plate and flame spreader, if there is one. If the oven has a pilot light, you will see a gas tube that may or may not have a small blue flame burning at its end. If the oven has a glow bar, however, you'll see an insulated electronic device centered in the burner. Consult an appliance repair person to service a glow bar.

Determine if the oven has a spark igniter by turning on the thermostat. You'll hear a clicking sound and see a spark in front of the pilot tube if there is one.

Observe the flame. It should be mostly blue and about an inch high. If it is orange or sputters, turn off the gas, unscrew the pilot tube with a wrench and clean it with compressed air.

Start the pilot again and turn up the thermostat. The pilot flame should widen, but it usually takes a minute or two for the flame to spread to the burner. The reason for this is that the thermocouple, which prevents gas from flowing when the oven is off, must heat up to a prescribed temperature before it sends an electric signal to the gas valve instructing it to open. The thermocouple or gas valve may be faulty if the burner doesn't ignite.

Replace the spark igniter if it doesn't produce a spark when you turn on the oven. This may involve disconnecting some electrical wires, so have the oven manual handy.

Things You Will Need