Broken Power Socket on Logic Board

I sent my iBook G4 14inch, 1.42GHz in for repair under insurance. I was told that it was beyond repair despite it operating when taken in. [I had dropped it and the disk drive wouldn't work]. However, I finally bought it back off the Insurance Company and decided to see what was the problem. I found that the power socket had been ripped off the Logic Board and when I bridged the contacts the computer started up with no problem. It's a long story, so won't bore you with all the details, other than to say that the little pads have broken off the LB and I can't solder the socket back on. I can start it up by shorting the contact. My question is; is there an alternative point to which the blue/white cable can be connected [with or without a socket]?

Are you talking about the socket the AC adapter/charger plugs into? Can you post a picture of the area/damage 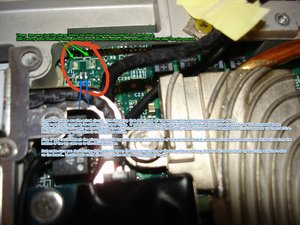 Thanks for the responses so far. I am not talking about the DC in plug on the right hand side of the laptop, i.e. the plug from the AC Adapter. The point I am talking about is where the blue and white cable from the DC In Board plugs into the Logic Board at the top left hand corner of the LB. I have tried taking pictures but unfortunately cannot get a good pic of it - the camera hunts and the results are waaay out of focus. The small leads - pads? to which the contacts on the plug were soldered are no longer there, having been broken away. I do have soldering skills, but whether I can make some new ones out of copper or whatever, I'm not sure. I'm not sure that any of our TV technicians here could do it either, but will make some enquiries. I won't go near the local Mac agents. I did hand the job over to a computer technician who said he could do the job, but he returned it 6 months later saying that the LB was 'fried'. Funny that, given that I can get it to work by bridging the contacts, but understandably, that is not my preferred method of starting up. I will keep 'plugging away' - no pun intended - but I can't help but think that it may be a lost cause. But once again, thanks for the responses. Cheers.

I had already found that photo, and tried to replicate it myself but without luck. Your pic is clearer than the other I had seen and confirms for me that the right hand pad, and the track adjacent to it are separate, but if bridged will start the computer The two pads are absolutely non-existent on my LB, and I had found that bridging the two points starts the computer. With luck I will be able to solder to each of them and Bingo! I hope! :-). Many thanks once again.

Yes it's the power switch socket located at the upper left on the logic board. It's hard to solder back the socket in place but you can solder the blue and white wires directly to the solder pads where the socket was fixed. Apply a little liquid flux on each pad then, with the solder iron, a small drop of solder on each pad (be careful to not bridge the two pads. Then skin the blue and white wires a bit, with the solder iron apply a little solder to the skinned wires edges and again flux to the solder pads, place the wires one at the time over their good location on the logic board pads (be aware of the cables and pads polarity) then solder them to the pads. I've done it many times with good results. Easy way to salvage a logic board.

+ I know my solution is a hard one, but can be done by a good Tech with experience. You have offered a very nice alternative solution that can be accomplished by a larger group of people. I still believe my solution is a better one as it returns things back to factory. However I believe this may be the way to go for most people. Thumbs up!

@ABCellars: I agree that your solution is the professional one and I would not do the kind of job I describe on a recent Macbook Pro but in this case since it's an old iBook so why not restore the unit by an easy and cheap method.

I would recommend the solution presented by lemerise. + to lemerise.

Assuming you are talking about what I think you are

replacement board may be the fastest solution