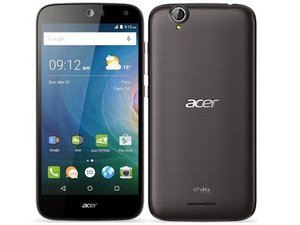 Liquid Zest Plus T06 has blank screen, but phone *works*

The phone stopped showing anything on the screen except for a faded brightness when I turn it on, but the phone functions otherwise underneath, if I know where to touch. I can turn it on and off, I can take pictures because I know where the buttons are, but no idea whether anything shows on the photo since there is no screen.

Is this fixable? The phone is working but the screen shows nothing. It's not that it's really, really dark, literally nothing shows on the screen, it just emits a dim light on the entire screen.

I have done Restart, Turn Off, left it off for a few days, and then I let the battery drain completely. Nothing made any difference whatsoever.

The battery cannot be removed, I bought it brand new, it has no SIM card.