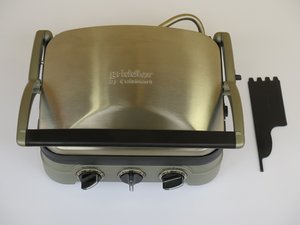 Cuisinart Griddler GR-4N a five-in-one kitchen appliance to be used as a contact grill, panini press, full grill, full griddle or half griddle .

Well, I have had this griddle frome a friend of mine some weeks ago. It seems fine but, after few seconds it has been plugged in, the earth leakage circuit breaker of my plant opens the circuit. I tested with a Megger the insulation resistance once it was cool, and it seems there is an insulation fail only when one, or both resistances become hot. However, unplug the resistance to test is a little difficult (their terminal are solded). A fail in other circuit of the griddle might be less probable, because, generally, a fails when the electrical resistances are heating is a typical fail.

Before to disassemble everything I would lice to know if someone else has had this problem…thanks.