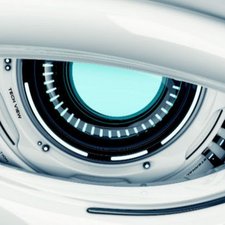 Is my iPhone 6 still functioning?

My screen got totally smashed. It did a little of backlight when turned it on. I assumed that the possible repair requires just screen replacement, so i disassembled it and checked so. I put the screen on the desk and manipulated with it carelessly, while the rest was laying on a pillow. The screen achieved a few more cracks and damage. It took me a day to decide, pick the right and cheapest screen on ebay for $10. I was curious if it would just start with the old screen. I have also grinded the surface of the phone with fine sandpaper and polished it, while manipulating carefully and gently. The problem is that it doesn't show anything. Any image or so. Connecting through iTunes doesn't work because i guess it requires you to have at least unlocked the phone from lock screen. It does actually produce heat after an hour of being turned on. So is it worth the repair, or is it dead, because producing heat does not necessarily mean that it is working. Any ideas how to determine if it is working, some detection through pc (something such as android sdk) note that there are no repair shops in my radius, and pretty sure that they wouldn't bother testing my phone with their screen.

If your broken screen was still showing backlight, theres a good chance that your iPhone is still functioning. Connect your new screen and it should be working. Post your findings once you’ve tried this