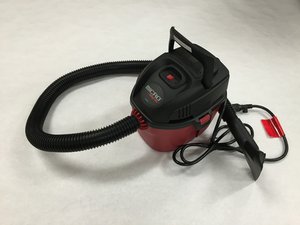 One gallon wet/dry vacuum manufactured by Shop-Vac, with catalog number: 2021000 and model No. MC150A.

It is one of those small, tall shop vacs (4 hp 4 gal) that has a 20 ft hose. It has worked great all summer. Acts like partly blocked but I installed brand new filter and made sure hose is completely clear. Maybe noise coming from motor, what would cause that? It’s a shop vac brand but not that model listed here. Brand new last spring.

Yeah there isn’t much to shop vacs. It’s the the hose, filter setup or motor. That’s pretty much it. Unplug the hose and see if you’re getting suction at the base. If not and you said the filter is good, then the motor (you said was noisy) is damaged. You might be able to open it up and check for something fouling up the motor. Since it isn’t that old I would write or email the vendor and complain of the failure and they may offer a replacement for minimal shipping or no charge. Good luck!

Loss of filtration at some point is often at the root of this problem. What happens is dirt gets sucked up into the impeller chamber. It happened to me when the retainer cap fell off the bottom of the filter and the dirt was bypassing the filter, but it could happen with a poorly seated or damaged filter, too. On a ShopVac there is a coarse sponge-like filter inside this housing to catch any larger fragments and dirt before it gets sucked into the impellers. It isn’t a complicated repair, 15-30 minutes. Pull the lid off, invert it,

and remove the screws anchoring the lid to the vacuum unit and separate it.

Then there are a few more screws to remove from the dome that was under the water-stop ball and you have the chamber and filter exposed. Remove this filter and clean it.

It’s doubtful anything has bypassed this filter that could be throwing the radial balance of the impeller disk off, but if you think that is a problem you’d need to go further to expose it and probably run a wire or small brush into each opening to check. However, if the ‘sponge’ is intact that is very unlikely. Increased noise from the unit is usually related to the motor straining against the lack of airflow.