I bought a new house and it had this alarm in it. There’s 2 motion sensors, a fire alarm, tamper switch and the panel itself. It wasn’t working and found the power switch up in the roof. Upon turning it on after a couple minutes it beeped twice every 10 or so seconds. Me and the previous owners also have no idea what the code is. There is a trouble light on as well. My question is if I buy a whole new panel can I just install it and set my own code and have it work or does it have to be the same brand or model or would I just have to replace the entire alarm, alarm box, motion sensors etc. Any help is appreciated! Photos of the alarm system, sensors and the keypad I’m thinking of purchasing below. Thanks 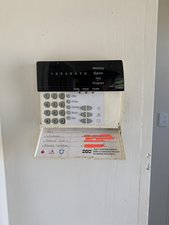 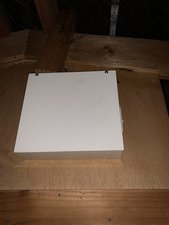 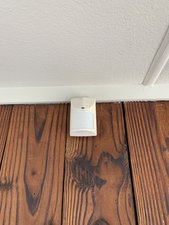 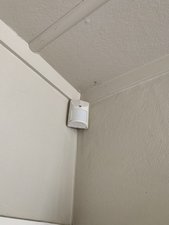 What is the model number of the system?

If the existing system is old enough there may be information online e.g. service manual, schematics etc, that may help you fix it. Have you checked the control box for any obvious damage to the circuit board which I assume would be there?

If it has a backup battery have you checked that it is OK? With the power turned off it would have been running the system until it died.

A new control panel most probably will not interface correctly with the existing alarm control box where all the cables from the sensors, switches, power etc are connected.

You won’t have to replace the sensors, switches, sirens etc and perhaps not even the power supply to the control box if the new system has the same power specifications but you will have to buy a new control panel and associated control box (unless they’re one in the same).

Be sure to label all the cables and take pictures before disconnecting them from the existing control box to make it easier when reconnecting them to the new system. Usually the “zones” are marked i.e. IR sensors, tamper switches and reed magnets, etc. Also the siren (bell?), the AC and DC power connections (if there is a backup battery installed) and perhaps a phone line connection if the system is that sophisticated.

Be careful not to reverse the power connections to the IR sensors as they’re polarity sensitive.