New LCD for Surface Pro 3 not powering on

I have a Surface Pro 3 that had a cracked LCD. The screen worked, but the digitizer was broken and it wouldn’t accept touch input. I ordered a new LCD, but when I connected it, the backlight didn't work. I could tell it was the backlight because you could see a faint image on the screen if you shined a light on it.

I checked and re-seated all connections with no luck. I just chocked it up to a bad LCD and sent it back for a refund. I then ordered another LCD from an entirely different seller. It arrived today, but this one isn't turning on at all. There's no faint image on the screen or any indication that the LCD is even getting power.

I plugged the tablet into an external monitor to rule out the motherboard, and it works fine on an external monitor. So my thinking is I either (a) have an incredibly bad string of luck with LCDs and this one's dead too, or (b) there's an issue with the LCD flex cable.

I checked and re-seated the spacer between the flex cable and connector on the board and it looks fine. The flex cable itself looks okay to the naked eye, but it was bent back and forth a lot when I was trying to get the first LCD working. So I'm thinking perhaps it got crimped.

I ordered a new flex cable to see if that fixes the issue. I'm just curious if there's anything else I might be missing?

The new flex cable arrived, but no luck. I also checked the fuses suggested by @jayeff below. Both are showing continuity with my Fluke DMM. Is there a possibility it could be the spacer/shim between the flex cable and motherboard? It doesn’t really seem like there’s anything in that shim that could break. I’m sort of at a loss.

If the problem is still there when you replace the video flex cable then did you disconnect the battery from the motherboard before replacing the screen?

Sounds as though the backlight power fuse could be blown.

Here’s an image from Step.7 of the ifixit Microsoft Surface Pro 3 Display Austausch guide where I’ve highlighted two components that may be worth looking at.

If you have a DMM (digital multimeter) you could check them to see if one is a fuse by testing to see if they are short circuit and not open circuit or perhaps with the laptop turned on check if there is voltage on one side of the component and not the other indicating that it is blown. Again I don’t know the specs but with most it won’t be more than 20V DC 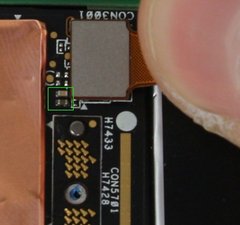 Thank you! I will check this out if the flex cable doesn't work. I'm assuming if it is a blown fuse, it's probably not going to be worth repairing, especially on a PC of this age.

IF it is a fuse and it is blown then I think given the cost of a fuse it is well worth to try replacing it and check what happens.

Check for any markings on it to help identify it as to its value.

I can't find the schematics for the motherboard but given other laptops it is usually a 3A fuse. (example only to show cost of the fuse)

The smd package size may be a consideration though. The most usual sizes are either 0603 or 0805 scroll down to "passive rectangular components" to view what the sizes are.

If the voltage is there as I suggested that you test for then all you need is to be handy with a soldering iron.

make sure that you disconnect the battery from the motherboard when doing the repair!

I added an update to my question above. Unfortunately, the new cable didn't seem to do anything. I checked continuity on the fuses you suggested. Both seem okay. Just to make sure I tested the right components, I took a picture and highlighted them: https://i.imgur.com/HaX7BZf.jpg

So now I'm kind of at a loss. I guess it's possible I got another bad LCD, but it doesn't seem very likely. I saw one post on here where someone had success by replacing the shim between the flex cable and board connector, but I don't really know what could "go bad" with that shim that would cause it to need replacing.

Any other thoughts by chance?

Thank you very much for your help and time!

Did you check if there is power at the fuses? when the laptop is turned on?

If there is and it is between 12-20V then the problem is either the cable, the cable connection (at either end) or the LCD panel.

If there is no power then either they are not fuses (although not many components test short circuit at normal unless they are faulty) and they are not associated with the backlight power or there is a problem further back on the motherboard.

Perhaps the schematics can be found by searching for the "(insert board number) schematics" Sometimes you can get lucky ;-)