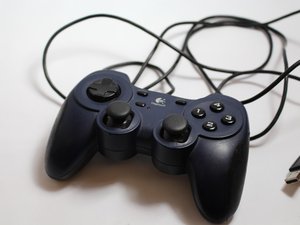 The Logitech Dual Action is a USB, PC controller for gaming

So basically, I’ve been trying to play games with my controller, and it only SOMETIMES connects, and if it does it’s only for a split second, I think it might be because a bit of the special uhh, whats it called? protective case of the wires is exposed, like the white stuff, it’s from the Kittens I have.

Basically it means that you need to replace the cable. I would replace it first and see how that goes.

Just get the glue off and de-solder the cable. Make photo’s before you proceed as you need to know which color goes where. It will not be easy to find the cable (part).

Hi Joshua! Sry for the late reply.. Yes you can ask him to replace it if he is able to find the part.