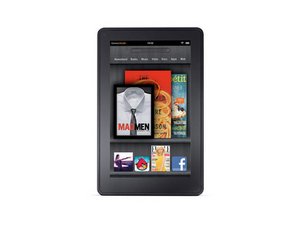 The Kindle Fire, Fire, or Amazon Fire is an Android-based media tablet by Amazon with a multi-touch color display. Repair requires only screwdrivers and prying tools.

Is there a spot for a micro SD card?

I read that it would be hard to change the memory for the Kindle Fire (great forums you have here) but is there a spot where you could add a micro SD card? I have one (they are so small) with 4 GB of room, so that'd be a 80% increase ( 3 GB are already taken by pre-loaded stuff) of memory.

(this is my first time here)

ben smith, the Kindle Fire does not have any memory slot. It"only" comes with the 8GB of integrated flash memory.

Since it does not have a slot, you wont be able to add it.

The newer Fire HD has a slot, not the original. I have to wonder though if that 8 gig SD/internal storage chip might be compatible with a bigger replacement, if you could just replace it with a newer 64 gig or something. It would take a bunch of digging into chip datasheets to figure it out. And it would involve unsoldering and resoldering which isn't trivial considering how tiny things are. I was an electronics tech in the days of vacuum tubes and discreet transistors, I've ruined most modern surface mount stuff that I've attempted.

In photos, my Kindle Fire has an option for exporting to SD card. Given what appears to be the Kindle Fire state of affairs, to-wit: no SD-slot, saving to an SD card is a vacuous option!

On my "Settings tab" I found where you are able to add a micro sd card, just have not figured out how.

It's on the right side top. Just have the volume/on-off button at the top of your kindle.

I just installed one into my fire 5th generation. Seems to work fine.

the kindle fire hd 7 hasnt got a memory card slot

Thanks, In will use the card I bough for something else

On a 4th Generation 8GB Fire HD which had no way to mount a SD card I used a San Disk DuelUSB Drive plugged into the usb/charging socket. The software on the tablet had been updated to version 5.1. Going to the video app on the home screen it was able to find a list of movie files on the Duel Drive and play the movie file with no problem. Don't forget to have the files you want to play in a standard format so they can be read by the software on the tablet.

Of course there is a risk of damage to the USB slot with a 2cm drive sticking out of the side of the tablet so I only leave the drive in place when i want to play something on the drive and thats not that often. Its also important to also eject the USB drive correctly using the command to eject before removing it rather than just removing the drive by yanking it out so the file being used isn't corrupted

Interesting, so it must have what's called USB host mode. You can probably hook up an OTG cable to a powered USB hub then all sorts of USB things like printers, scanners, modems, DVD drives. Host mode is the ability to act like a computer instead of a storage device. I have one Motorola phone with it, one without. Nice feature.

Some models do, some don't. On a Fire 10 HD there's a little cover on the right edge you can pry open with a fingernail, it's inside that. On other models it may be somewhere else, investigate anything that looks like it might open.

But even if it has it, on an Android phone there are some apps that can be moved to SD and some that can't. I did find that having a lot of old pictures (screenshots and from the cameras) eats into the same space available for apps. You can move them to SD with a file manager program, then put the SD in a reader and move them off to someplace where storage is cheap, like a blank DVD.

Top left is were it is turn your fire rectangle way and use finger nail to open hidden slot.that's all I know

5th generation, sure, but not the original. It's the fastest and most reliable way to transfer files on and off it, shut it down and put a card in or take it out. With ES File Explorer, maybe some others, you can transfer over bluetooth or WiFi or USB but it's slow. I've had a 128 gig card in and out of a Fire 10, works fine.