Replacement parts for your PSP Go model to fix your broken console! 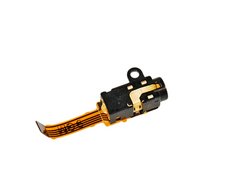 The PSP Go is the first complete redesign of the PSP line and the smallest PSP. The PSP Go lacks a UMD drive, instead using 16 GB of internal flash memory to store downloaded games. To keep the form factor as small as possible, the PSP Go stores in a closed position and then slides open to reveal the control buttons.