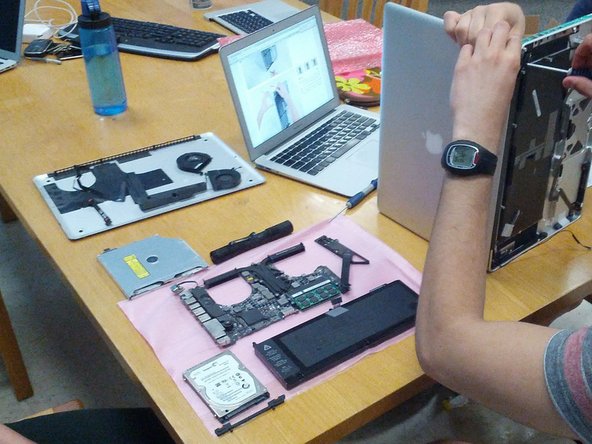 Root beer happened to my keyboard. Though I immediately shut the laptop down and inverted it on paper towels — thus probably saving the rest of its innards — the N, H, Y, 6, F5, /, -, and + keys all went kaput in the end. Removing the keycaps and cleaning with rubbing alcohol was to no avail — something was fried, so my only option was to replace the keyboard.

The repair went very smoothly, and everything is back in working order now. It was quite stressful, though. I made sure to take breaks frequently so that I could relax and to prevent myself from rushing. If you're careful and methodical, this repair is definitely quite do-able. And in the end, the machine booted without a hitch! Huzzah!

There were a few things which I wish I had known before starting:

- The Phillips head screwdriver shipped by iFixit as recommended for this repair is too large for some of the Phillips screws which need to be removed. I was lucky that I had a friend with another set of screwdrivers. All the other screwdrivers worked just fine.

- There is a part which is not mentioned by the instructions which needs to be removed from the original upper case and transferred to the new upper case. It's a vertical spar which supports the logic board and optical drive, and can be seen clearly in the photo for Step 35. You should take this out at this point and move it to the new case.

- ZIF connectors are very tricky. Make sure you read the directions and look carefully to see which way you should pry on the retaining lock; they can chip very easily if pulled from the wrong direction.

- The magnetic project mat is a life-saver. If you don't have one, get one. Make sure to put screws on it head-down, as this makes them stick more firmly to the surface. Take advantage of the whiteboard surface to make good notes about step numbers and locations of screws.