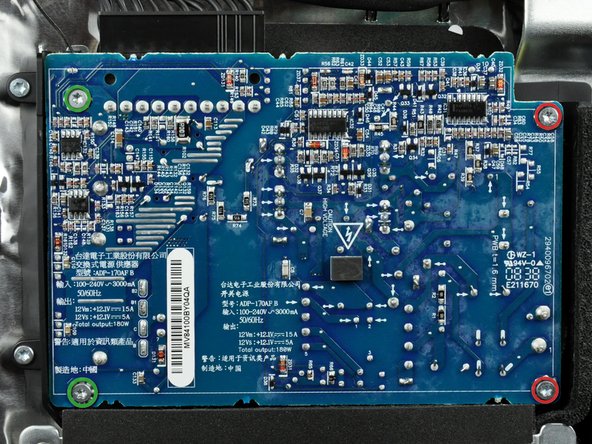 My desktop iMac suddenly does not turn on any more - I tried everything I can check from internet sources, from checking power cables to reseting power management, all unsuccessful. Thanks to an iFixit guide and comments, I checked the power supply unit inside iMac and appeared to be the problem, zero volts on the whole thing, and none of the diagnostic leds illuminated when connected to power.

Extracting the old power source was not that hard, I had previous experience from replacing hard drives and broken screens from laptop macs, and this was far easier, the excellent walkthroughs found here were a must. There are some power supply replacements on eBay, but I decided to purchase the replacement on iFixit to be sure it works, the replacement were different from the one supposed to be compatible with mi particular model (imac intel 20`` 2/2.4 (EMC 2133) model A1224 late 2008), but thanks to pictures and other specs, I were able to determine that power supply for EMC 2210 was compatible and was the same model found inside my computer (as shown on first pic). When installed and before re-attachment of the screen, the first diagnostic led illuminated (pic 2), and after everything was reinstalled, my computer were like a new one, also I upgraded memory to 2x2Gb, yes this old model can handle 4 Gb and works very fast now!

Repairing iMac was easier than expected, saves lots of money, and also avoided an excellent computer to go into trash, It was worth the money, even when customs from my country (Chile) make me to pay USD$86 of importing fees!!!