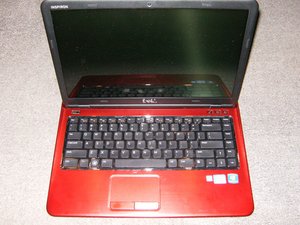 Inspiron 14z, a 14-incher with a slimmed-down aluminum body, available in a surprisingly staid color palette. For 2012, Dell had updated the 14-inch Inspiron 14z with Intel's 3rd Generation Core Series processor and a brand new design that's thin and light enough to make the system an Ultrabook.

Having problem With mother board

i have inspiron 14z(1470) .it not start up. when i concern with tech people they told me just change your mother board . but it too cost, even i change the mother board , they told me it also run few months means 6 to 12 months. what should i do please suggest me .

And it`s service tag is :HVQG6P1

You can always try a reflow to save it long term but be aware there is a very real risk of doing further damage to the motherboard. At this point the machine is a loss anyway, though. What this does is reflows the solder joints on the board. If this fixes it your 14Z is back. If it doesn't it's got deeper problems and will need component level work. Due to the risk this involves you'll need to think about it for a while. If you decide not to, remove the HDD and put the laptop on eBay.

If you care about the computer or it's critical then don't try this. It's temporary to start, and it risks further damage. Since it's dead, you might as well try and see what goes on with it.

While most techs don't recommend this I don't have as much of a problem with it even though I don't agree with the idea of making stuff that wants to die like this work again. The main problem here is this won't last most of the time. But then again, this is probably what most eBay sellers do with "refurbished" boards. They get them dead, REFLOW them and then sell them to the next person.

For this reason I can suggest it in a pinch or if you know it'll do it all over again but not professionally. This won't look good for you in business.

Here is your service manual for the computer. While that's not for the 14z, they're basically the same.

Look at the manual to gut the laptop. Remove EVERYTHING from the computer. Yes, this includes the stickers and labels off the board.

After doing this, preheat your oven at 400 degrees for 5 minutes. While you do that, put your motherboard on a cookie sheet you don't mind never using for food again with something to keep it up. You can use anything you want to that's stable. The board needs to go chip side up since that's the side you want to reflow.

Put some liquid flux under the GPU(if there) and southbride. Only use enough so it flows under the chip. This will help the reflow out.

When the oven is warm, put the board in for 5 minutes. Set a timer and don't let it sit.

When the board is done, remove it carefully and let it cool for 2-3 hours or longer. You can tell if it's cool by the solder being solid and not molten. If you bump the board while the solder is molen trash it. You probably ruined it. When it's cool use new thermal paste on the CPU and copper shim the GPU to keep the temps down further. After you do this, plug the fan in and reverse disassembly.

After this, see if it works.