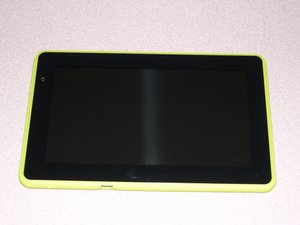 Why my Digital2 tablet will not turn on?

When I try to turn on my tablet nothing happens, and the screen stays black.

Yeah we have the same problem. Didn't even have the thing for a month.

i did not use it long before mine stopped working. we should contact the company and ask him to recall all of the tablets or report them to the federal trade commission for faulty tablet.

Mine stopped working, and I've had it on the charger for days. The back heats up like it wants to work, but doesn't.

O bought mine off of HSN or QVC. I have looked all on the internet, different web sites and all phone numbers called don't work.

Mine was packed away. I just found it

Push the reset ..its on the front...tiny hole..need little needle...push n hold a couple of seconds

Worked. Was going to trash it. Good little tablet

There is no answer. I purchased one for myself and I thought it was a great tablet. For as little as I knew. I also bought my grandson one too. Both of our tablets went down at the same tlme. My grandson hadn't had his 2 months. I reported it to D2 company. This has been going on for months. I have never had such rudeness from any customer service like this before. I would not recommend them to no one.

please how do you contact D2 exact same problem

this the problem iam having tablet will come on but will not go to the next step.

I did everything but the light up the screen

We can't get the screen tolight up to come on

The screen won't light up

Try the reset hole on back. Pin hole

If the device will not turn on try these steps:

wont turn on ,screen is black

My tablet doesn't turn on why? I use the charger u supplied, now won't turn on at all. !!

My tablet doesn't turn on, why ?

Can u help me

I bought this tablet a couple years ago. It worked great for less than one year. Then died. It was still under warranty so I sent it back. The company must have either sent me a new or refurbished one, or completely re-did the the operating system because the whole thing was totally different. Worked for awhile, then back to the same old thing of not turning on at all. I did the hard reset routine, put the pin in the back hole while holding down the volume and power buttons. All different combinations of how to push various buttons. It comes on then stays at the screensaver of Digital 2--then when the battery loses juice, the screen goes black again. I've even tried charging it with a USB cable plugged into the side and into an adapter wall outlet thing-a-ma-jig, instead of using the regular charger. That worked better and allowed a decent charge, but the charge wouldn't last real long like when it was new, so I assumed it was a battery issue......Then while doing it another time, it went to sort of a black safe mode type screen or like what you see on a Bios screen and asked if I wanted to reboot, or update from this or that....like 4 or 5 options. Tried them, twice. Still blank black screen. This tablet is pathetic. No good. For the amount of time I was able to use this tablet it wasn't worth the money. If the battery is dead or defective, it doesn't pay to get a new battery. These tablets are cheaper now than having the labor done to replace a battery and battery cost. These devices are designed to fail. The average laptop today lasts just outside of the warranty scope and maybe to 2 years. All they want you to do is buy another one, again and again. To me, tablets are worthless. I thought in the beginning it would be good to use like a Kindle without having to pay for books, and if you go on Google store the apps are free. I had a lot of book type apps which is what I wanted to use it for, and I also found it convenient with the bluetooth to play music on Pandora with my wireless speakers. Now I have nothing because this thing is a real piece of junk. Won't be buying another one.

My guess is that the d2 pad company puts a virus in their tablet software to kill the tablet. In this way, they try to get you to buy a new one from them in exchange for your broken one.

I ran into the same problem. Firsts your apps screw up, then the OS goes into a coma, and then your BIOS dies and after that the tablet is dead. After that your only choice is to send the tablet back to the company for a costly repair or replacement. However, it is usually replaced instead of repaired. Sounds like a virus to me.

I bought one in March and the charging port broke inside. I called the company and sent my tablet to them so the sent me a new one on November 9th. Just today it stopped charging. It says it's charging but it;s not holding a charge. Nothing I can do for this POS.

My digital2 will not turn

This tablet sucks, it won't turn on

Wat can i do it does no come on at al

Dude same when i try ro turn it on it has lines all over maybe these tablets are just really bad?