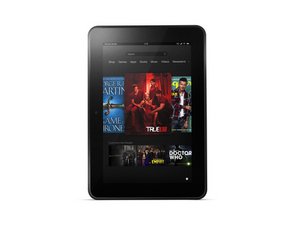 The Kindle Fire HD 8.9” is a tablet computer that allows users to read books, view comics, watch movies and find general entertainment at a mid-range price. Fixes are simple and do not require any special tools.

my cracked screen frame has a slide in drawer for an sd card, but the new frame does not. Is there a different screen assembly with this drawer?

Just curious if you ever found a solution as I currently have the same issue finding the correct replacement. Thanks!

If you acquired a new screen assembly that was already mounted to another frame, then you could have the compatibility problem you describe, because some 8.9" HD's come with SD card slot cut-outs in the screen frame and some don't. Unless you can forego the SD card feature you could then be in trouble, because you'll never remove the new screen assembly from its frame without breaking it; the glue is just too strong. My advice is to forget the SD card feature; you'll have to buy a whole new (overpriced) screen assembly to get it back. Just reassemble the Kindle using the slot-less frame; it'll work fine for most purposes!

If you really, really need the SD card feature, then consider buying a new tablet and sell the old one on eBay-- the net cost will be the same or maybe even be cheaper than buying another screen assembly for the 8.9" unit.