Black and silver single cup coffee maker with water reservoir on the left hand side. K40/K45.

only brews small cups regardless of setting

My Keurig has started to brew small cups of coffee regardless of the setting it have it on. I usually make a large cup of coffee. I have cleaned it as per the directions to no avail.

Chuck McCabe, I just finished fixing one from a buddy's shop. Same issue, no matter what it would only brew 4 oz at a time and took forever to do so. I did a few things. First I removed the plastic holder that holds the K-cups. 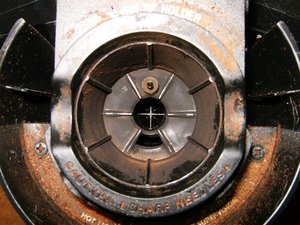 This one is simply pulled straight up, but had a bit of resistance from some spring clips. 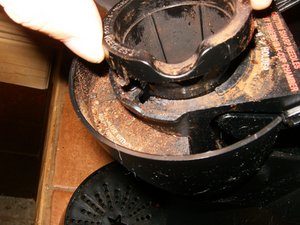 On the bottom of that is a tapered needle that pokes the hole into the bottom of the K-cup. On the side of it is actualyl a small hole. Use a paper clip (or in my case I used a needle) and stick it in there to remove any scale, coffee grounds etc. As you can see from the first pictures, there will be a lot of coffee in and around it. 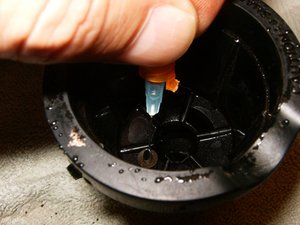 Next you need to clean the top needle. It's a bit trickier since it is somewhat hard to reach around the sides. So open the Keurig all the way, and again use a needle or paper clip. There will be three holes around the needle. 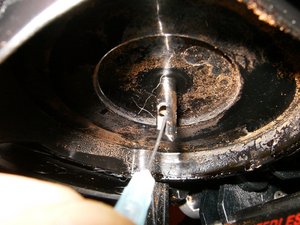 At this point I tried to see if it would finally brew a 12oz. coffee which it did not. Next I concentrate on the water intake. Remove the tank by simply pulling up on it 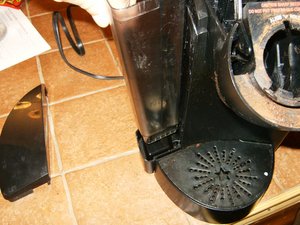 On the bottom of the tank is a filter and a check valve. I removed the three Phillips screws from the filter and removed that from the tank. I cleaned it with some running water and an old toothbrush. It's a bit tricky to remove since you will need a long Philips screw driver. As a finally step I wanted to check the water supply to the needle for the top of the K-cup. If you take a look at the part where the top needle is mounted, you will see two Phillips screws that hold the top cover on. Remove those. 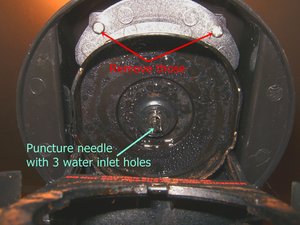 Slightly lift and pull the top cover out. 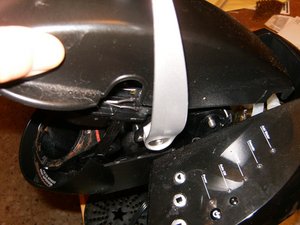 with the cover removed you can see where the water comes from the boiler through a check valve and then to the K-cup Needle. 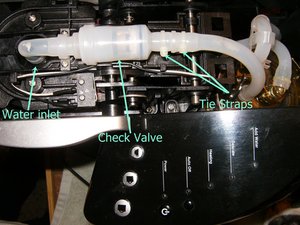 If that check valve has scale, sediments or other contaminants in it, it will not let the water get through properly. Unhook the check valve from the connector above the K-cup needle and remove the tie straps. Now you can remove the check valve. Try to blow in it from the boiler side and it should open. Do that a couple of times to loosen any sediments etc. I also run some hot water from the K-cup side into the check valve and shook it up. I did get quite a bit of debris out of that. Once I had it cleaned, I reassembled the valve, hoses and cover. I did replace the tie straps as well. Once fully reassembled, I did get the Keurig to brew 12oz 25 times in a row:-). Guess I fixed it. Biggest issue with this repair are the need for a long Phillips #2 to remove the screen from the tank, and to reassemble the two screws for the top cover. I did turn the Keurig upside down to get gravity to help me reinsert the screws. Hope this will work for you as well as it did for me.

Worked great thank you for the help and advice

This isn't an answer, it's a GUIDE (or at least should be).

@mayer, thanks. you mean something like this Öffnen und Reinigen einer Keurig Kaffeemaschine :-)

Thanks for posting this info. Turns out our filter screen was gunky, though we only use filtered water. The Keurig is working as good as new!

super! from one old guy to another- this should be a basic remedy for nearly all coffee pots. What about a solvent like vinegar or other type be used first to nullify the breakdown procedure? gusinshop

I had the same problem, I fixed it by cleaning the screen in the valve at the bottom of the water reservoir, the valve is spring loaded. The easy way is to get a bendy straw, cover the valve with water, hold reservoir up so that you can push bendy straw into bottom of valve then blow with your mouth until air and bubbles flow through the valve. You may get a little damp but not too bad. This fixed my Keurig immediately.

You are a genius! I followed your guide and couldn’t believe the amount of coffee sludge that I pulled out of my Keurig. It works like a charm now and I am able to make full cups of coffee! Thank you!

Get a magnet screwdriver it helps

Use scotch tape to attach the screw to the screwdriver. Start the screw with a few turns then pull the tape off and finish tightening.

A tiny wad of chewing gum will hold the screw to the screwdriver, and then you can put it in place and screw it in. This works for plastic screws and screws that are ferromagnetic.

Greetings, I actually have two 2.0 Keurigs. One that works properly (call this one A) and one that is new (call this one B) and was going to be a standby Incase the other one fails. Well as time goes by coffee maker A was not brewing right. I was thinking to replace it with coffee maker B which was only used one time and stored. So I took B and was going to have a cup of coffee. Not happening. It would only brew a oz or two. I tried a few fix it's to no avail. Even trying slapping it's bottom. Then I was going to clean the filter above the needles. Guess what they all aren't made the same. I could not get at the filter. After a couple of day and a few swear words of trying to fix B. I decided to give A a good cleaning. After all is said and done A works perfectly now. How's that for a silver lining. At least I know that B is useless.

My Keurig (100 series) started doing this rather suddenly. Once day it was fine and then over a few days it suddenly started brewing 3 oz cups. The worst decrease in performance came when it had just gone unused for 3-4 days (I was away). Before that I was getting 4-5 oz cups. The coffee also isn't very hot, more like lukewarm.

I use filtered water and brand kcups.

Maybe these clues will point out what my problem is. It seems like any kind of build up or blockage would happen gradually over time, not all of a sudden in a few days.

One tip for those with this problem: keep running the Keurig through its cycle with the same kcup. You'll eventually get a full cup of coffee but it takes a while. Then you have to put it in the microwave to heat it up. Temporary rigged fix.

Thanks for any help.

I did a lot of #Google #Keurig #Troubleshooting searches. Ok the #keurig70 is fro a thrift store probably explains why it didn’t work. It’s a really clean machine but my guess is whoever owned it didn’t use filtered water. We live in Austin and the water is supplied by the Colorado river. Mine started off saying Prime on it and doing nothing .. So the first thing I did was take the reservoir off and I put water in the intake area then I used compressed air in the little hoses/valves that linger over the water reservoir which fixed the prime issue I used compressed air on the needle too.. I put as much white distilled vinegar I had, not quite half of the reservoir but good enough and the rest filtered water .. my large cup wouldn’t brew so I started with the espresso option and worked my way up. I’m still descaling it but I hope I’ll have a decent cup ☕️of coffee soon.. as far as temp go to menu what does it say? Mine is 192 degrees ...

run tank of 50/50 white vinegar and water thru machine.

which pokes a hole in the top of the k cup

coffee now tastes worse than crap, and only a 1/2 cup

ran another 50/50 solution thru machine, cleaning the 3 orifice holes in discharge piercing needle each cycle with paper clip

poke each orifice each cycle

I asked the time and you’re telling me how to build a watch!! I have no time to rip apart my Keurig and clean out clogged pin settings and other such non-sense. I’m going back to Mr. Coffee!! LOL!!

@cliffster sorry this did not meet your expectation ;-) If I would have seen your question earlier I would have suggested to dump your Keurig and get back to a good old percolator. It's a lot less trouble :-))