iMac Will Not Turn On

I've disassembled the iMac and looked at the diagnostic LED's and found that only LED #1 (at least I believe it is #1) is the only one that turns on. I then tested the power coming from the power supply which is giving me 11.79 volts on the following Pinout.

From what I read this is pointing to the logic board but I wanted to make sure from the Pro's out there in this forum. Shouldn't I at least be getting 12 vdc and not under that? I've watched it drop from 11.84 vdc to 11.79. Please see the following pictures to understand what I described above. 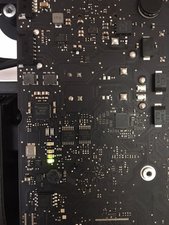 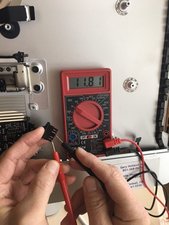 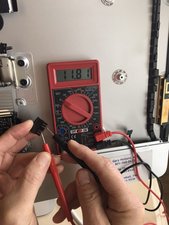 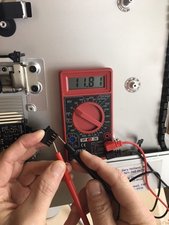 Did you end up fixing it? i have the same problem with mine

I see this question is backdated a bit and hasn't been replied to. I dont know if you still need input on this one or if its too late.

LED one indicates that the logic board is receiving a trickle charge from the PSU. when you push the power button, the second LED should come on, indicating that full power has been received, then the 3rd indicates the GPU initialising, and the 4th indicates the LCD is connected and enabled.

if you get no second LED, then i'd initially check that the power button hasn't been damaged.

You can start by unplugging it and shorting out the power pins.

If you still get no response, then it could be PSU or logic board, but its hard to trace without a process of elimination of some kind.

I also have a problem with mine.

I has seen little use since it was purchased, and isn't left running when not in use.

Anyway it wont power on at all.

I haven't yet dis assembled it. This happened a few weeks ago, and after a couple of tries I was able to get it to boot.

I have tried the power on for 10 sec then again trick. I have also checked and tried different power cords.

I haven't contacted apple yet to get a quote on a power supply replacement.

I have seen the part online for around $130.00 any other tricks to try before I tear into this thing?

Opening is the part you want to be careful with. We recommend using the correct cutting wheel and tools for it. Apple made one, but so did iFixit, which is a great tool for getting the LCDs off. You'll also need replacement tape for when you rebuild it.

Diagnostics of a power fault, start with the diagnostics LEDs on the logic board. They are there to see how far the power is getting through the board.

But once you know the fuse is OK in the mains cable, and you've had intermittent boots recently, there isn't much else you can test without opening the machine up unfortunately.

Not sure of any operators in Australia, but we ship to Australia from the UK.

Hello Jon, I have a similar issue. Only the bottom LED stays green and nothing else happens. What can I do to see it is a faulty power supply unit? Thanks