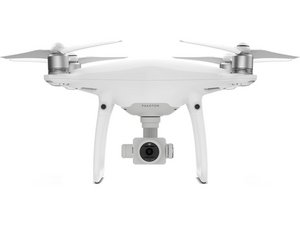 The DJI Phantom 4 is a smart flying camera with a plethora of sensors as well as a 3.1 Mile (5 Kilometer) range and 28 minute flight time.

Crashed not to bad. Still flus. Camera not responding. Best method to find out how to fix.

We all know how frustrating not being able to fly & fully enjoy the PV is, so I thought I'd run a few tests to see what results we might get:

1) As mentioned by others when you first boot up, the LED on the back of the camera glows orange for a split-second then turns solid green (later as you access the microSD card, it'll blink).

2) The gimbal will reset & move to mid-tilt position.

3) The miniature cooling fan inside the camera head (yes it has one) will startup. If you listen closely, you'll be able to hear it blowing & feel it's exhaust coming out the top vent of the camera. FYI, the sound of the fan is distinct and different from the sound of the gimbal servo holding its position.

4) If I disconnect the camera connector, boot up the PV and search for the range extender's Wi-Fi address on my iPhone, i'll see Phantom_xxxx eventually appear. If I try to connect to it, the iPhone will report "unable to connect to Phantom_xxxx". After a while (less than a minute) Phantom_xxxx will disappear from the list.

I believe this is because the range extender is unable to establish a link with the Phantom's Wi-Fi as the PV's antenna is located in the bottom of the camera (plug disconnected), so the range extender eventually gives up and turns off its own Wi-Fi address which then drops from the list.)

I'm not sure how useful any of this information is to you, but hopefully it will give you a sense of "what's working & what's not" and where to go from here.

when you first boot up, the LED on the back of the camera glows orange for a split-second then turns solid green (later as you access the microSD card, it'll blink).