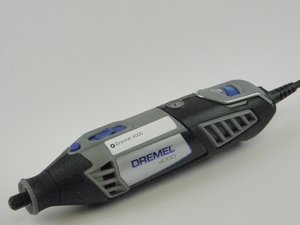 The Dremel 4000 is a variable speed rotary device. It is compatible with with all Dremel rotary accessories.

Hi my Dremel 4000 which really didn't have much use on it just quit working. After researching it several you tube video's suggested the one of the winding wires on the coil broke at the crimp spot so it seemed like a simple repair. Upon close inspection I couldn't see a broken wire and did a continuity test on the windings and they seem to be okay. I have a new switch assembly coming so hopefully that will do the trick. I guess my questions would be am I on the right track? Does anyone have experience with Dremel problems? My last older model Dremel just up and quit after again really not much usage but I didn't bother to research it so maybe the broken coil wire trick might have fixed it. Thank you.

I have the Dremel 4000 and I literally used it for an hour took a break then tried to turn it on and it wouldn't turn on. This is the second time this has happened. I've had warranty on them so I just return them but I'd like to know what is going on and why this is happening.

Your Dremel is not designed to be operated for extended periods like that. It's hard to believe that you haven't at least intuited that by now.

Dremels are crap. Unfortunately I haven’t found something better yet. These tools seem to get more cheaply made every new model. There should not be so many people complaining about all these problems. It’s ridiculous.

bkm , It is possible that it is the switch assy. if all else looks good. Info. from ifixit trouble shooting Dremel 4000 1st link below. If the tool will not power on, and the switch lever and power cord have been checked for integrity, then the electronic assembly must be replaced. While there are multiple parts within the electronic assembly, the entire assembly is delivered as one piece and must be replaced in its entirety. Below find a disassembly guide, 2nd link below, for your dremel which will get you inside the device to check/test/verify if wires/switch/components on the board are loose/burnt/damaged. Good luck. I hope this helped you out, if so let me know by pressing the helpful button.

Thanx,, I ordered new assembly. I hope that does it. Thanx for the help! Bill

bkm, Glad to help, thanks for replying back. good luck with your Dremel.

Hi folks, I had the same problem, only used a handfull of times since bought and just stopped working. I decided to take it apart and when doing so, one of the brushes went flying out as I deassembled. I reassembled and re-seated both brushes and it works perfect. The two flat head plastic like screws on each side adjust the tension of the brushes spring, I have a feeling one of the brushes wasn’t seated firmly enough and caused it not to work. Worth a shot before ordering replacement parts.

My dremel stopped turning on, my brushes were seared fine and i read a review that the physical switch often wont trigger the internet switch in most dremel models after some use and said hitting the dremel at the electronic assembly. This only worked once so I disassembled the dremel adding a good amount of hard drying glue to add depth the the plastic piece that must trigger the internal switch and havent had a problem since.

bkm sure sounds like you are on the right track. Only thing I would have done different is to check the switch assembly for simple on-off function to see if that is going to be the issue. You so want to make sure that your brushes are okay and check the resistor which goes to the motor from one of the brush assemblies. One weak spot of these is the plastic switch that is activating the microswitch on the switch assembly. Make sure that it is properly activating.

Thank you. The brushes are practically new and I did a continuity test on the brush assembly that has the resistor. It seemed my Fluke tester made a slower beep beep sound than a normal continuity beep when I did check the resistor part. I assumed that it was ok. I'm a basic volt meter user so I didn't know how to test circuit board or speed switch. I reassembled Dremel leaving out on off slider plastic piece so I could reach in and manually press micro switch but it did not turn on. I found a new electrical assembly online for 28 dollars so I'm gonna hope that does the trick. Seems a shame my second Dremel has failed after such low usage like my first one. Thanx for replying.

My Dremel was either intermittent or died when under any load. An air blow out/clean made no difference. Brushes were basically new. I disassembled the unit and noticed a tiny piece of metal fell out. This turned out to be part of one of four slide contacts between the circuit board/switch assembly and the external main coil assembly. These 2 main parts connect together via 4 pins and 4 sliders. Two had broken so the contacts were loose at best but mostly non-existent. I was able to give it a McGyver fix with thin slithers of metal that help to maintain the contact. How did this happen? I do not know. My Dremel is out of warranty but has not had that much use. Well ,fixed and useful for now.

Hope that description helps someone else fix their Dremel.

The power “switch” is a sliding lever that engages a microswitch (which does the actual switching). However the design of this is so %#*@ dumb as to make one despair for the state of the human intellect. If this happens again, get a small hammer, slide to the “on” position then give the body a sharp love tap right above the speed control dial. If it then comes to life you’re a victim of bad design. If you look at the picture of the dremel 4000 electrical assembly replacement picture earlier in the thread you’ll see a black box on the left. That’s a microswitch. The blue plastic “on/off” switch we humans operate is nothing more than a long strip of plastic that reaches all the way back to press this microswitch. The trigger on the microswitch is nicely rounded so that something sliding over (and travelling down the long length of the component) can easily operate the trigger. However, in the dremel the microswitch is mounted sideways so the blue plastic on/off lever (which is soft plastic) has to scrape up over the side of the trigger that has a sharp right angle. The trigger is also soft plastic. To make things extra schmart the microswitch isn’t actually screwed on to the housing, it’s only gripped by a ridge molded into the inside of the housing. So one of 3 things may be happening when you slide your power switch: 1. The plastic has been scraped off the blue lever by the sharp corner of the microswitch’s trigger, 2. The plastic has been scraped off the trigger itself, or 3, the microswitch isn’t being held securely so instead of the lever depressing the trigger, the whole microswitch part moves. All of these failure modes are covered by whacking the side of the tool just above the speed selector dial.

Great advice! I had taken completely apart, cleaned, sanded the brushes and nothing. I slid it to high, hit with a hammer just above the switch, and Whaaa-laaaa Power! Thanks hberg32! Hammers fix everything! Dremel 200.

A hammer worked only once for me, I added some hard drying glue to the end of the plastic sliding lever where it triggers the microswitch. This added depth and integrity to the cheap plastic and allows it to adequately hit the microswitch

i have a dremel 4000, it cuts out very often, but more so if im using the flexicord, i have tried all the possible fixings people have put up here, and it still happens, if i leave it for 10 mins or so it works for 5 mins again, i get the fact it’s obviously over heating but for no reason, people have said its not designed to be used extensively, then whats the point of it being in existence, i had an older dremel for about ten years and it never had a problem, and that did much more work than my newer one, its just out of warranty, but i think ive got the answer, dremel have started to use sub standard parts, in england they use free visible wires while in the states they seem to have a closed section that clips into the back of the commutator housing, is there a difference in quality between the two, other than its easier to take apart and refit as opposed to the english part, as an example i used my old dremel to sand uprights in a set of bannisters, it was running solid for the two days it took to do the job, my newer one would now take a day to do half of a single upright,,, not impressed dremel, take note and solve these problems, or make the price more compatible to its ability,

My Dremel 4000 is working when used by itself but for some reason it doesn’t spin the flexshaft (Dremel 225) when it’s connected anymore. Any idea what might be causing this?