This seems to be a fairly common issue but with various causes and I can't seem to find the cause on my laptop.

I understand that the fan running at full speed and CPU throttling often point to a faulty temperature sensor.

I'm using the program TG Pro to check sensors, and it's telling me that the HD sensor may not be working correctly. I replaced the SATA cable (where I believe the sensor is located) but no luck. I've tried a different hard drive, a solid state drive, with no luck.

I got fed up and went ahead and replaced the logic board, figuring this would surely solve the issue. Still I'm getting the full blast fan and throttled CPU.

Any ideas? What else could it be? Is there a HD temp sensor that is located somewhere other than the SATA cable, logic board, or HD itself?

I will note that when I boot into safe mode, the fan still runs at full speed but the CPU throttling goes away.

There is a Video from Lois Rossmann about that

Thanks. Good video but it doesn't address my issue. He's fixing a motor control for the fan. My issue stems from faulty temperature sensors.

When you replaced the logic board did you see any silly looking residue around the heat sink?

hey maybe this helps.. a video from Louis Rossmann

This is most likely your trackpad. Since you replaced your board and HDD cable there is not much left. Before replacing your trackpad, download Macs Fan Control and see what your battery temp sensor is reading. Normal is anywhere from room temp and up but nothing over 50. Your looking for some crazy reading like -144 or something of that sort. Your trackpad has a temp sensor and is a fairly common issue.

Thanks. Macs Fan Control is a nice program I didn't know about. But it's showing normal temps for all sensors. There's not even a crazy reading to indicate one might be bad (this is what I've seen from similar programs). Here's a screenshot: http://i703.photobucket.com/albums/ww37/...

That's a good thought if it's the only sensor I haven't replaced. I just unplugged the trackpad from the logic board and started the computer (doing an SMC and PRAM reset), but the issue remains. Wouldn't this indicate that it's not the trackpad sensor?

No. That will not work. If the trackpad is not connected it will refer to the same state that it would be in if a sensor failed.

Gotcha. I'm ordering a trackpad now to give it a try.

I mentioned before that I'm using TG Pro to read sensors and it's telling me that the HD sensor may not be working correctly. This is strange to me since I replaced the SATA cable. Is there some other HD sensor? I also thought that maybe the used cable I purchased is also bad, but the chances of that seem low.

Hi I think the pram or smc reset fixes this maybe it's a pref if the first two don't work try restarting in recovery mode command r... and see if it fixes it that will tell you its software if not you could be a goner but I'm not a tech at all!!! But I did have this on one or more of my mbp

Thanks. I should have mentioned that I did several pram and smc resets after replacing the logic board. I don't think this is a software issue as I've wiped the stock HAD and even tried putting in a different HD.

Hi there i have the same mac and I have the same problem but power button don´t works the light on keys don´t work the fans are 100% cpu kernel task uses 200% cpu. I allready change the disk for 1 ssd install last version of OS sierra but no luck I try tu update smc it says that update but when i see version is the same. the power button works when i made key combination like option + comand + power so is not hardware fault . i have the web cam broken can be from there? is there any solution please help me this is my first mac and Im regreted all ready

I have a more cynical and conspiratorial answer to this. I have exactly the same problem with my 2012 Macbook Pro. However, this only happened after my machine would not switch on at all.

I was told that maybe taking the back off and disconnecting the battery for 60 seconds would solve the problem, which it did. My Macbook started up with the power button for the first time in weeks, and I was very grateful.....

That is until I realised the computer no longer recognised the battery, the fans suddenly started doing 6200rpm, and something called kernel.task was using 300% CPU time, resulting in my machine now being mega-slow.

Apparently this is a panic reaction to temperature sensors reaching 100C or thereabouts and designed to prevent the user from commencing any activity which might push the temperatures any higher.

All very logical you might reply, but I do not believe this was just coincidence. After all, I paid for my laptop years ago, and it is well out of warranty. If I choose to fry my CPU, or disconnect the battery, or interfere with any component on the motherboard, that should be my right without any built in codes by the manufacturer to prevent me from doing this.

If we could prove that this is a deliberate ploy by Apple to encourage the purchase of replacement parts, or expensive and un-necessary repairs, then in my view that is a deliberate fraudulent activity in order to increase profits; and needs to be tested in the courts; as millions may have spent money they didn't need to.

There must be a file somewhere in the system folder, which kernel.task is using in order for it to continually access a simple routine (review date/time for example) repeatedly; and if this was moved to the trash the process ought to cease on a re-start. However, I would not care to beging trashing systems files, and I might not have enough access privileges to do so anyway.

If anyone has any idea of the likely name(s) of anything which could be the culprit, I would love to know.

There is nothing wrong with my battery. I made sure it was fully charged before I disconnected it for 60 seconds. I am certainly not going to spend more money on an item that does not need replacing.

This seems to be a recurring theme on mac forums, where people are spending thousands on new motherboards, replacement trackpads and just about everything else, when all that is necessary is to disable the throttling software and incorrect temperature readings.

As I said before, I have paid for this laptop many years ago. It should be mine to do what I like with, and if that means taking the back off and disconnecting the battery temporarily, then so be it.

If I purchase a new car, I would not be too pleased if (on exceeding the speed limit) the car immediately throttled back and refused to move at over 25mph until I took it to a garage for an expensive and unnecessary repair; so why should I put up with this from a computer?

If I want to fry my CPU that is up to me, and should be no one else's business.

The problem could potentially be the battery as well. If a Mac doens't detect an internal battery properly, I have found that they will throttle the CPU. A battery replacement wouldn't hurt to try, especially if yours has a lot of cycles already.

Thanks. I've actually replace d the battery already, although it's a 3rd party brand. I suppose I should try getting an Apple brand battery. 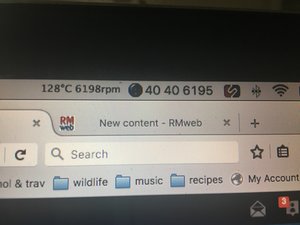 Here is a photo of my temperature readout. The 128C is what the system is saying, which is nonsense as the air from the fan exhaust is cool.

The two other temperatures are from an app called Temperature Gauge 4.1 which is set to give CPU 2 Core and CPU PECI temperature sensor readings.

Where did you get to with this Greg? I have the exact same issue and I'm getting really tired of reading about doing PRAM or SMC resets

Same issues: kernel_task ridiculous cpu usage (500% sometimes); full throttle fan; unusable and slow computer; multiple disc formats and OSX upgrades and downgrades; doubled up the ram; disconnected good battery; heat sensors not excessive and nothing feeling hot. I've been hesitant to spend any more money on upgrades like you have without first exhausting any and all other possibilities. I've also been debating whether to buy a new computer altogether but other than SSDs the new MacBooks aren't that huge of a performance upgrade to this early 2011 machine. If I can figure this out I think a new SSD will be my reward.

I now use Macs Fan Control on manual setting. This morning I performed the delete .plist hack

Deepanshu posted about on January 4. Since I have El Capitan I had to go through a couple extra steps to unlock the protection like it says.

I did this earlier today and the computer has not lagged once all day. This is a first in months. The fan still goes full throttle but now at least I have full functional capabilities of the computer and kernel_task is staying at around 4 to 5%. That's a relief.

(That was strange: I just exited Macs Fan Control; my fan went full throttle but the computer is able to operate with normal functions. But when loading Macs Fan Control back up there are a couple sensors missing that were there just a few minutes ago: CPU Diode is no longer there. I'm writing this and troubleshooting as I go. I'll do a reboot and see what the sensors say after that. )

It looks like I need to use Macs Fan Control on manual Constant Value or on Sensor-based Value to keep fans from full throttle but I don't mind that at all. I'll keep digging. 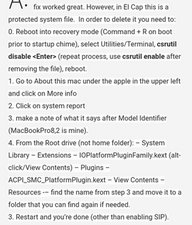 All you're doing here is masking the problem not fixing it!

Hi @danj we meet again here,can I follow that photo solution will fix my CPU lag ?

or I should sit down wait for New Battery Test first..

@davis623 - Putting water into your flat tire won't work and more than this will.