TL;DR up front: I think my SMC chip is bad but am not sure. How can I tell if it’s a bad chip on my logic board or something easier to repair?

A while ago I spilled water onto my MacBook Air (Early 2014) keyboard, and impatiently tried to power it back on without waiting very long (stupid, I know). It started to boot but eventually died. I then was more patient, and dried it out for four days. Still no luck, but after cleaning some obvious corrosion off the IO board with IPA there were signs of life, so I replaced the IO board and cable with one I got from this site and the computer booted.

As happy as this made me, the system runs really slowly. The kernel task takes up a large percentage of CPU, which is likely because the fan does not spin at all (Macs Fan Control reports 0RPM despite trying to set it to full blast). All of the temperatures seem reasonable (<50C, checked using Macs Fan Control). I have tried resetting NVRAM and SMC, but no luck there. I was able to get it to run at full speed using “SMC bypass” or whatever the debug mode enabled by holding the power button and connecting the power adapter is called, but without a fan I realize I run the risk of damage.

When I run diagnostics, (holding D while booting), I get the following error codes:

At this point, I think I’m looking at a bad SMC chip which I don’t have the tools to replace without a whole new logic board. Does that seem accurate? Is there anything else I can check/do before I seek out a for-parts device online? That seems cheaper (but admittedly riskier) than repairing my logic board or purchasing a new one.

EDIT: Here is a picture of the SMC chip and surrounding area 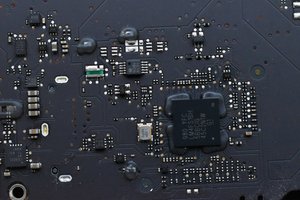 Yup, you have an SMC issue. You’ll need to take the logic board out to inspect it as its on the other side right were the keyboard tends to leaks when its splashed MacBook Air 13" Anfang 2014 Logic Board austauschen The purple marked chip is the SMC chip: 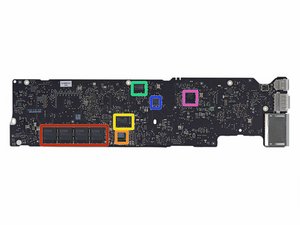 Look for corrosion around the chip, If you see something take a nice sharp picture so we can see things as well Bilder zu einer vorhandenen Frage hinzufügen

Thanks Dan! I added an image as requested.

@adbotelho - Sadly I do see corrosion damage so it does look like your SMC chip and the surrounding components got the worse of it ;-{

Some one with deep micro soldering skills and access to the needed parts should be able to bring the system back to life! Or, you could just replace the logic board.

Thanks for the input. I’ll be on the lookout for something cheap I can salvage the logic board from.