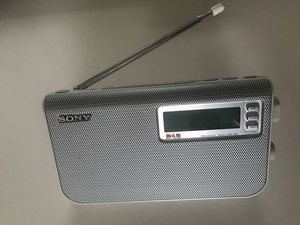 There are many types of DAB radio and some faults are generic. Please only use this Device page for DAB-specific faults.

My Sony XDR-S50 DAB radio (which I’ve had since 2007) has suddenly started saying No Ensemble. If you remove the batteries for a minimum of several minutes and replace them, or press the reset button (hidden under the battery compartment door) then turn it on it rescans and finds all the stations, any of which will play. But if you switch it off and immediately back on again (without removing the batteries) it’s back to No Ensemble. I think it did this on one isolated occasion a year or more ago but had been fine since.

I guessed there might be a flash memory chip in there to holds the scan result, and that this might have failed, which seems to be confirmed by this post on this Polish forum (thanks, Google Translate!). (The DAB tuner module is marked Fontier Silicon so I simply Googled for Frontier Silicon DAB and found this post in the first page of results).

This implicates an 8 pin SOT serial EEPROM chip, so I’ve ordered a replacement.

I’m posting this to record the problem and hopefully the fix for the benefit of the community and I’ll report back. Meanwhile if anyone has experienced similar problems, please feel free to comment.

Progress report: I obtained the serial EEPROM mentioned in that Polish forum and fitted it, but then the radio wouldn't even scan. I think that forum post related to a later version of the Frontier Silicon module and I guess the chip I got isn't compatible.

Google doesn't recognise the markings on the chip and a posting on the allaboutcircuits.com forums (usually quite helpful) didn't yield any useful results. I've just posted a similar request for identification on the Microchip forums. (The chip seems to be an Atmel part - Atmel was taken over by Microchip a few years ago.) I'll post any further developments.