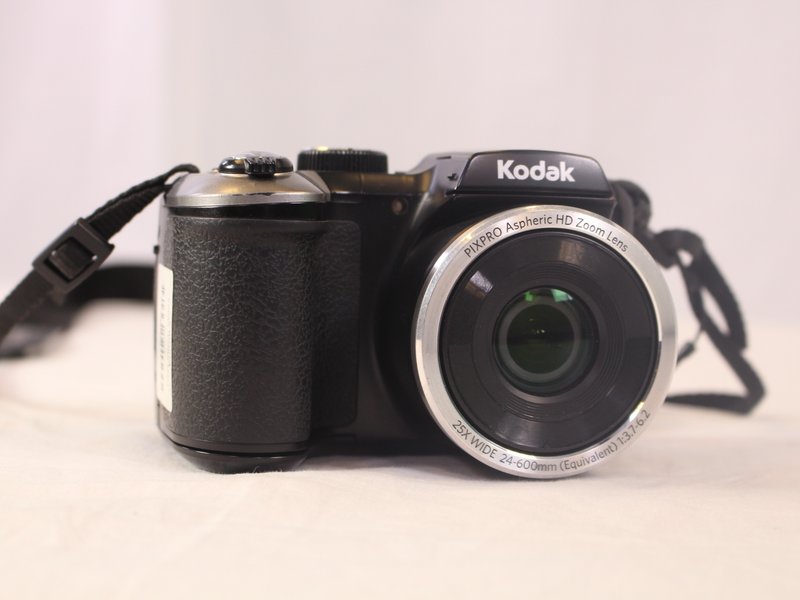 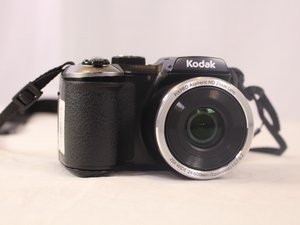 Digital camera from Kodak, released in 2013. PixPro AZ251 is a 16 Megapixel camera with an optical zoom of 25x.

Camera Will Not Turn On

Your Kodak PixPro AZ251 does not turn on when pressing the power button.

Batteries in Need of Replacement

Your current batteries may be dead. Insert four new AA batteries in the same manner described in the "No batteries" section. A guide for replacing the batteries can be found here.

The motherboard is an important electronic circuit component. It includes the central processing system, memory controllers, input/output to other systems in the camera, and connectors. If your camera does not turn on, there may be an issue with the motherboard in your Kodak PixPro AZ251. This issue can be resolved by replacing the motherboard, which you can learn how to do here.

The flash module on your Kodak PixPro AZ251 is loose, and cannot support itself when manually opened.

If some foreign object is stuck in the small gap between the flash module and the camera cover, preventing the module from remaining open, you can attempt to remove the object by slipping a thin piece of paper in the gap. If this method does not dislodge the object, you will need to remove the camera's front and back covers to give you access to the gap, therefore making it easier to dislodge the object. A replacement guide for removing the back cover can be found here.

Image Is Not Clear

Dirt On the Lens

If dirt is exterior, clean the lens with a piece of cloth.

You can try to remove the scratches by dropping a couple drops of alcohol on the lens, then rubbing it with a microfiber cloth.

The image might not be clear because the camera is not set in the appropriate mode. For more information on how to adjust the modes of your Kodak PixPro AZ251 camera, please refer to the official user manual here. The picture might also be out of focus. To solve this, depress the shutter button halfway and hold until the frame on the LCD screen becomes green. Then, press the button all the way to take the picture.

Not using a support structure when taking a picture may lead to blurry images. Using a tripod can stabilize the camera, allowing you to take clearer pictures.

When you rotate the mode dial, the camera mode does not change, some modes do not work, or the dial does not rotate at all.

Camera May Be In Sleep Mode

If the dial rotates but does not switch modes, and the previous solution did not work, the dial is nonfunctional. You can learn how to replace the dial here.

If the mode dial is stuck and you cannot rotate it to switch the mode, it may either be broken, or dirt/debris may be preventing it from rotating. You can learn how to replace the mode dial if it is broken here. If it is only dirty, you can clean the dial once it is removed, then reattach the dial.

A working shutter button can be depressed in two stages: depressing it halfway allows you to set the focus and exposure, and depressing it completely captures a photo. Thus, there is some inherent looseness associated with the functioning of the button.

The screen of your Kodak PixPro AZ251 is no longer working properly. You are unable to see either part of or the whole image on the screen.

If your Kodak PixPro AZ251 was dropped or the LCD screen was punctured with a sharp object resulting in a cracked screen, the best option is to replace it. You can learn how to replace your LCD screen here.

LCD Screen Is Loose or Dislodged from Camera

If your Kodak PixPro AZ251 was dropped or the screen was exposed to intense pressure, the screen could become dislodged, or detach from the back cover. If the LCD screen is damaged, you should replace it. You can learn how to replace your screen here.

Pixels are the smallest picture elements in a display, and are composed of three sub-pixels (one blue, one red, and one green). A stuck pixel occurs when the liquid in one sub-pixel has not been distributed equally and results in the pixel displaying only blue, red, or green. Stuck pixels can often be fixed by applying pressure in the region of the stuck pixel with a damp cloth.

Also known as dead pixels, broken pixels occur when all three sub-pixels are not functioning and result in the pixel appearing black. Broken pixels cannot be easily fixed because they involve broken transistors in the LCD structure, so the simplest solution is to replace the LCD screen. You can learn how to replace your LCD screen here.

My Kodak camera az251 screen broken inside and I can see onIy half screen . So i want new screen to buy but there is no way to buy . So plz if you have any link from where I can buy new screen then please send it me or reply me soon

First two bodies were DOA. Finally got a working one, used it a few times, and now -=- surprise surprise — it’s dead. Too disgusted to mess with it. Kodak is not George Eastman’s company any more, and their product is a complete steaming pile of garbage. (And I have three fully charged batteries , two sim cards, and three lenses, including the ones that came with the kit, and every combination has the same issue.)

After I connect with the USB to the computer it’s says connection failed. What do I need to do?

I just bought an AZ 528 Pixpro yesterday, and the LCD screen displays all the camera’s icons, but the screen is black otherwise, and will not display a picture of what I am pointing the camera at; if I snap a photo or take video, it is, likewise, black. This is very disappointing; although there is a customer service card provided, “customer service” is a recording, asking me to leave a message.

Fortunately, I purchased a warranty at the retailer, so an exchange may hopefully resolve the issue. What a hassle. Very frustrating, and, I might add, enlightening, regarding Kodak products, these days.

Upon inspection, I see this camera was constructed in Myanmar. Production value there might be of lower spec than some nations….