My iphone 6 was stuck in headphone mode after some water got in the headphone jack (phone was on wet lawn after sprinklers). I replaced the lightning/headphone jack after purchasing the new component from ifixit, but I'm still have the same problem after the repair. The repair seemed to go smoothly otherwise. Does anyone have any experience/suggestions with this?

The following post seems slightly related in that changing the jack did not fix his problem relating to the headphone jack.

Water damage on the logic board most likely.

That or, not that it happens often but have you tried another part just to rule out it possibly being defective?

Sometimes iPhone stuck in Headphones mode preventing you from hearing the sound. The problem is that iPhone mistakenly acts as if headphones are plugged in.

Here i found a usefull article on

I thought about it some the last few days and finally solved the problem.. I'm posting it for completeness. I appreciate everyone's replies, some of you were kind of close and beating around the bush.

Some water must have gotten onto this connector, dried, and bridged the small contacts with mineral residue. Even though I previously cleaned the whole board, I must have missed this. I now probably have a good spare lightning connector/headphone jack assembly. 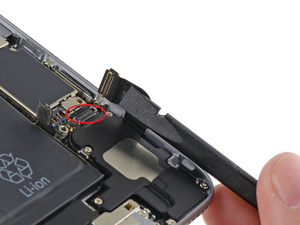 Anyways, thanks to everyone (and in the related post) for getting me thinking in the right direction. Hope this will help someone in the future.

Hi if i was a girl i would have been willing to give you a blowj because that connector did cause the problem on my iphone 6 and after cleaning it the problem was fixed. Thank you

@daobox, thank you very much!!! I have stucked with this problem too and your solution is the best! Thank you!

Try plugging in some headphones to see if that bumps it out. I often have my iPhone get "stuck" thinking it's in one mode, when it's really in another. Down-sides of using the software too fast.

If that doesn't fix it I'd say you should think back to why/how you replaced the charging assembly in the first place. Was there water damage? Was there a hard drop? Were you playing music? etc. If there's been water damage you need proper water damage repair, if there was a drop you probably need to take a look at your logic board for damage, and if you were playing music I might say check out your connections and loudspeaker for signs of damage.

If all else fails, you could have a bad part! ¯\_(ツ)_/¯. Email support[at]ifixit.com and ask for a replacment. Be sure to reference your order number ;)