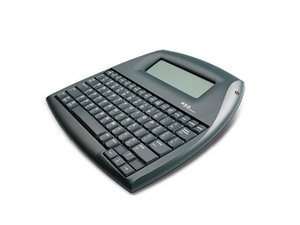 The Alphasmart Neo is all black, with an average-sized keyboard, with a protruding small screen coming out of the top. The “NEO by Alphasmart” logo is at the bottom right of the screen. The user tutorials and serial number are on the back of the NEO. The battery cover is also located on the back case, with a small black slider covering them. Small black rubber and plastic legs can also be found on the back.