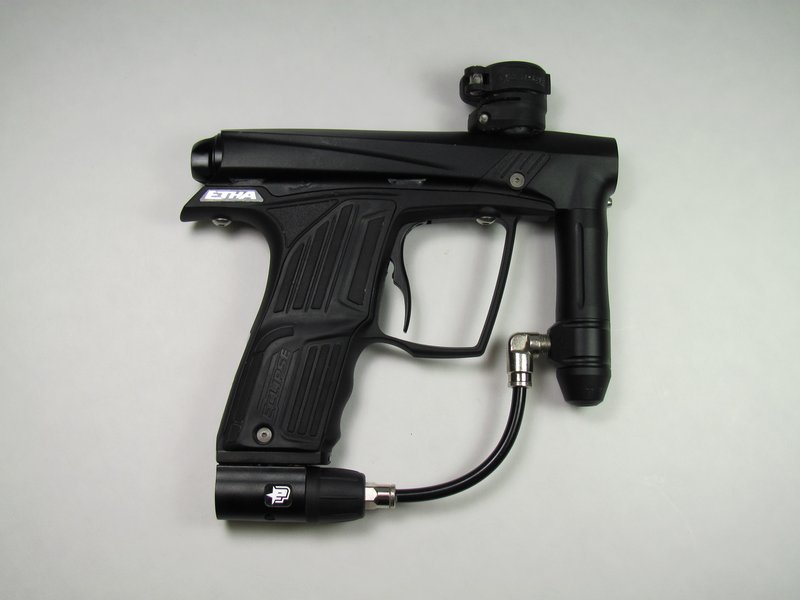 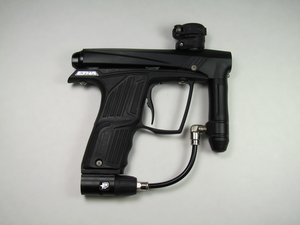 The Planet Eclipse Etha is a mid-range electronic paintball marker released in October 2011. It offers a lower-cost alternative to one of Planet Eclipse's most popular paintball guns, the Geo.

When the air tank is attached, the bolt assembly leaks.

Bolt is not completely tightened

WARNING: Remove the Air Tank prior to any diagnostics. Disassembling a pressurized marker can cause PERMANENT DAMAGE and SERIOUS INJURY to you and your marker.

Sometimes, the bolt can come slightly unscrewed during play. Use the largest Allen key (supplied from manufacturer) and tighten the bolt down clockwise.

If tightening the bolt didn't work, you probably have a leaking O-ring in your bolt. These small rubber O-shaped seals can wear out over time. Look at our replacement guide here.

When the air tank is attached, the connection point produces an audible air leak.

O-rings wear out, and the one in your tank is probably being screwed and unscrewed a lot. Remove the tank and replace the O-ring at the top. Do not add any lubrication to this O-ring.

This doesn't happen too often, but sometimes a hard dive during play or dropping the marker can damage the air line leading into the regulator. Click here to view our Regulator replacement guide, but instead of removing the regulator, follow the given procedure on both ends of the Macroline to replace it.

Marker will not turn on

No matter how many buttons you push, the light does not come on.

Batteries die after a while. Go here to see how to open the battery compartment in order to replace the 9V battery.

Electronics Board is Broken

Over time your marker will get very banged up. Drops, dives, and just rattling around in a gear bag can cause components in your marker's circuit board to fail.

Marker Does Not Fire

Lights are on, but the marker is not firing.

The Etha has a small laser sensors (usually called eyes) that will prevent the marker from firing until a paintball is fully seated in the chamber. This prevents the marker from breaking the paintballs inside of it (commonly called chopping). Turn on the marker and look for the flashing light. If it is BLUE, skip this section. If it is YELLOW, hold the power button until it turns PURPLE. This will turn the senor off and the marker will fire every time you pull the trigger. Attempt to fire. If it fires, go here to replace the eyes.

Trigger detector out of position

Hard dives and drops can damage or move the internal components of your marker. In this case, the trigger detector inside of the marker has become bent out of position and can no longer "see" the trigger. To fix this, turn on the marker then hold the power button until the flashing light turns PURPLE. Go here to learn how to open up the battery compartment. Open up the marker. Look for a small silver box near the top of the compartment. Carefully bend the small box toward the trigger and pull the trigger. Listen for a “click.” Once the click is heard, use two small nuts (or something similar) to hold the box in place.

Trigger is not adjusted properly